If Julia Child is Einstein on the cooking evolutionary scale, I sometimes feel like an amoeba still waiting to grow some legs so I can walk on land. “Fire make food good!” would be my first thought. Followed quickly by “yum cheese!” and some wet-sounding gobbling noises. Now I’m not knocking simple food – there’s nothing better than a home-made grilled cheese sandwich on a rainy day but occasionally you want to explore some new culinary horizons. 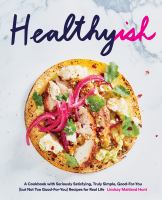 You'd think after my previous food fails, I’d have given up but no! I’m nothing if not intrepid! So I picked up the Healthyish cookbook by Lindsay Maitland Hunt. The author claimed that the “Cozy bean and egg skillet for two” was a perfect lazy way to cook eggs and would have a lovely sauce to go with it. Fast forward to a skillet of super-dry beans and eggs that I tried to choke down. Not sure what went wrong here but possibly my skillet was not small enough. I had better and yummier success with the “Seeded whole-wheat banana bread” and “Peanut Butter Granola”. 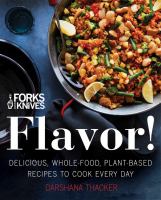 Next, I picked up a cookbook called Flavor! by Darshana Thacker which promised me “delicious plant-based recipes”. I think it was just bad luck that the first one I tried was the “Paella de Verduras” because let me tell you, for a book called Flavor (with an exclamation point no less), this was an incredibly bland dish! Little did I realize that this was a vegan cookbook that was also against using cooking oil. So you pretty much have steamed vegetables mixed with rice and some small amount of spice. Boring! However I would recommend the “Cajun Kidney Bean Sloppy Joes” as a nice hearty meatless alternative. I also liked the “Good Morning Bangkok Salad”.

Even though I had a couple more food fails, overall I enjoyed both of these cookbooks. And I encourage you to explore these and other great cookbooks we have. Who knows, maybe your inner Julia Child is just dying to get out!